Adding Fuel To The Fire Pit – Part 1: NG vs LPG 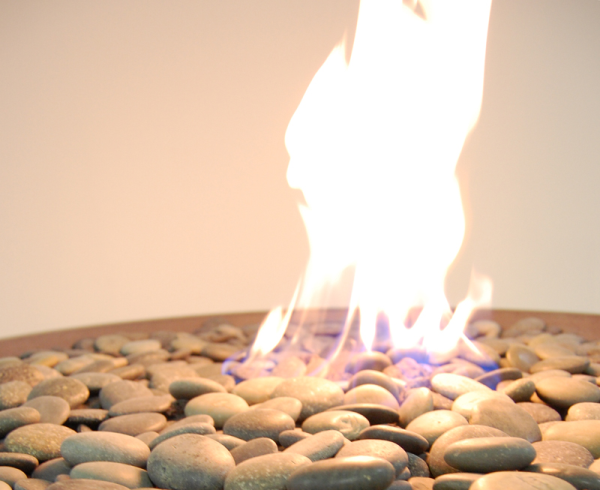 The differences between natural gas, propane, ethanol and wood-burning fire pits. Part one will compare propane and natural gas.

As with most products today, fire pits are available in a wide range of options and it is not always clear what differentiates them. Well, if we remove design from the equation for a moment and focus on the practical and functional side, probably the most important consideration when choosing a fire pit is ‘what makes the fire?’ Or, in other words, what kind of fuel does it burn?

These days, fire pits come in four basic types: wood-burning, natural gas (NG), liquid propane (LPG), and ethanol (alcohol). Wood-burning, is of course, the original and is often quite simply, either an open pit or vessel that you can light a fire in it. Though beautiful, raw and authentic, wood-burning brings with it smoke, floating embers, and ash, which in some settings, translates into nuisance, pollution, mess and even danger. In most urban settings, wood-burning fire pits are not an option, not just for the sake of your neighbours, but due to restrictive by-laws. This, of course, does not stop many people from trying.

A more sensible and sensitive option for fueling a fire pit in the city is one of the latter fuels above. The first two are quite similar: natural gas and propane. I will discuss the third, ethanol, in a later post.

For the most part, our use of these two fuels in day-to-day applications is similar: we use them to power our barbecues, heat our homes, run our fireplaces and fire pits, and fuel some vehicles. When these fuels are available, they are clean-burning alternatives to oil and gasoline. From a consumer’s perspective, natural gas and propane do roughly the same thing – they burn. Though the gases are functionally similar, there are significant differences which, if nothing else, affect the way that they are handled, stored and transported.

Natural gas, as the name suggests, is a naturally occurring substance that is often found in coal beds, when extracting oil, or in marshes, bogs and landfills produced by the anaerobic decay of organic matter. It is primarily composed of methane but is naturally almost odourless. The smell of gas is added later, for safety reasons, so that you can easily detect leakage. Natural gas is low density and will rise when released into the air. This makes it difficult to transport by truck, so it usually moved through pipelines and is delivered to homes this way.

Propane is also a gas at average temperatures, but it becomes liquid at a relatively moderate pressure. This means that it can be stored and transported in tanks fairly easily. Its boiling point at -42° C means that instantly becomes a gas as soon as it released from the tank. This makes it ideal for fire pit or barbecue applications where a tanked product must be used. Interestingly, propane is a by-product of natural gas processing and petroleum refinement. Propane is more dense than air, which means it will sink to the ground when released. This can pose a safety risk where there is not adequate ventilation and airflow. Like natural gas, the odour is added for safety.

Head-to-head, propane has about 2.5 times the usable energy per cubic foot that natural gas does. This is a big difference, but is generally rendered moot by the fact that natural gas tends to be cheaper – enough so as to be less cost per joule (BTU) than propane. What this does mean, though, is that for a fire pit, the burner cannot be used for natural gas or propane interchangeably as essentially, a natural gas burner must supply more gas flow to achieve the same flame as a propane one.

From an ecological standpoint, both fuels are clean-burning which means that the harmful emissions and toxins emitted during combustion are minimal. Both give off significantly less CO and CO2 than burning oil or gasoline. This being said, fire pits designed for outdoor should never be used indoors or in enclosed spaces.

So what does this all mean to you? From a functional perspective, both natural gas and propane fire pits work the same and both produce hot and aesthetically pleasing flames. The real limitations lie in the delivery and storage methods. If you have a home that has natural gas supplied to it or you live in an area where your home is fueled by a large, central propane tank, then it can be reasonably simple to run and conceal a gas line out to the location of your fire pit. If you don’t have this option, then fire pits can be effectively run off of propane tanks. In these instances, the biggest challenge tends to be ‘what do I do with the tank?’